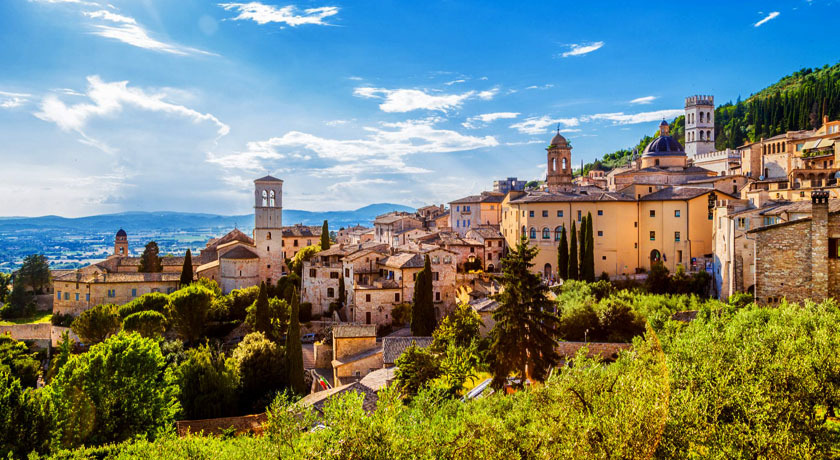 Along with Deruta, there are many towns which belong to the so-called “Borghi più belli d'Italia”. Everybody knows the famous, monumental cities Assisi, Perugia, Gubbio and Orvieto. Here I name a few gems to visit during your stay in Casa “Le tre Muse”. But every “borgo” in the surroundings is worthwhile a visit.

Trevi is a small town on a hillside in the heart of the Umbria region of Italy, and is rich in history and art.
Trevi was originally a province of the Papal States, but as for other cities in Umbria, political power was actually exercised by a small number of noble families and it was these families that gave much of the artistic and cultural heritage to the town we see today.
The town is famous for its good olive oil and celery.

This town is nestled on the southern flank of Mount Subasio, between Assisi and Foligno. Winding medieval streets, old churches and rich architecture are testimonials of its environmental, cultural and artistic heritage.
In summer, the warm weather perfectly showcases the honey-coloured houses and the never-ending florals. You can literally smell the freshness of the flowers in the air.
The ancient town centre of Umbrian origin, “Hispellum” dates from the first century BC. It shows important and impressive evidence of the Roman period which coexists beautifully with today's medieval urban appearance.

Located in South-eastern Umbria, Spoleto is one of the region's most fascinating art towns. Its wealth of history, varied cultural heritage and important arts events make it one of the tourist destinations most highly esteemed by visitors.
As an important fortified Umbrian settlement, Spoleto became a Roman colony. After the fall of the Roman empire, it was taken over by the Byzantines. In the early Middle Ages, it was conquered and destroyed by Frederick Barbarossa. Testimonials are the medieval fortress and the Roman aqueduct and amphitheatre.

Like something out of a fairytale, Todi is perched on a hilltop high above the winding River Tiber. There is a great deal of art to enjoy; Todi and the surrounding region have a wealth of art among the richest of Italy.
It's worth tasting the local wines such as the “Grechetto” and “Trebbiano” wines, which were already known in ancient times.

Castiglione del Lago is a pretty village on a peninsula on the western shores of Lake Trasimeno, towards the north-east of the Umbria region of central Italy.
The territory was originally subject to rule by the Etruscans and Romans, then from the 13th century the town had a great strategic importance because it controlled the roads that went from Rome to Florence. Most of the early defensive walls around the town can still be seen today.